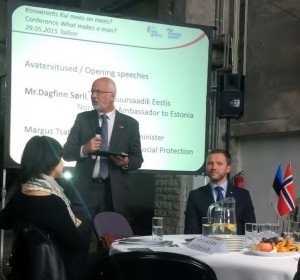 Why should violence against women upset men?

Because violence affects the ones we love – our mothers, our sisters, our daughters, female friends and colleagues.

Because boys and young men are affected too, when they witness violence in the family, or when they themselves are victims of violence.

Because wherever violence in close relationships occurs, the violence represents the main obstacle for achieving society’s goal of gender equality. In a home where the woman is beaten by her husband equality is unachievable. The gender equality situation in that home is not bettered when both do the dishes – violence has to stop.

What is men’s responsibility?

Still, the majority of men are not violent offenders! Is this majority supposed to take responsibility for the perpetrators?

No – the responsibility lies solely with the perpetrators. But men guilty of gender based violence are not, and will not be, able to act as role models. Therefore, ordinary men who do not use violence are the only ones in positions to renounce violence against women (VAW) – and should do so.

There are several good reasons for this:

To show solidarity with women as victims of gender based violence.

To show men who are perpetrators of harassment, abuse or violence in close relationships that there are alternative courses of action.

Last, but not least: It is crucial to stand up as role models for boys and young men. Violence is not the way to solve any problem, and in any way not in close relationships.

I also share activist Jackson Katz’s view on what he calls the ‘bystander approach’:

Instead of focusing on women as victims and men as perpetrators of harassment, abuse or violence, the bystander approach concentrates on acting in the role of peers in schools, groups, teams, workplaces and other social units.

This represents a shift in perspective, Katz says – by setting the perpetrator in focus, not the victim.

To speak up on violence and abuse is first and foremost not about being sensitive to the matter. It is about showing leadership, Katz states. I think this is well put.

What is Reform’s contribution?

Reform considers it is of crucial importance for us to engage in the struggle against men’s violence against women. This is not at least to create a common attitude in a wide variety of social groups that violence must be stopped – no matter who are the responsible. To do so, we conduct ourselves, and take part in, a range of activities.

Reform have the ownership of the White Ribbon Campaign in Norway – an international campaign for men to act against violence against women. In this respect, we earlier have conducted a broad campaign wherein well known Norwegian men stated their resistance against VAW. Volunteers by working directly with young men and boys in the Norway Cup, an international youth soccer tournament, and also by talking to boys celebrating the end of high school. This celebration is annually dishonored by a number of rapes. We think our campaign helped raise a most needed awareness among young men.

Reform also participates actively and significantly to the alliance Stop violence against women – as one of seven member organizations in Norwegian working life, religious and other bodies and NGOs, and as the only participant with a specific male perspective. The alliance has developed the Red Button campaign, represented by an actual pin button that is to show that every bearer supports the message. The Red Button has been spread nationally in several hundreds of thousands, both through the member organizations and by regular street actions in the midst of Oslo’s morning traffic. Men from Reform are to be seen on the street on every day of action, handing out buttons to bypassers.

The Red Button campaign has gained popularity in Norway. «Everyone» uses the symbol, even the prime minister herself. This is of course of great importance, because it means that leaders as well as commoners are taking an official stand against violence against women.

But is wearing a button a way to disclaim responsibility, one may ask? Possibly – it requires little to bear the symbol, as no one dares to argue pro violence. We still think that there is of importance to help draw a limit line for what may be considered ‘kosher’ in society. When not drawn, this limit may be harder to see.

Reform has for many years been the host of anger management training for men, and has developed a model for group therapy for men that actually want to set an end to their own violent behavior. As anger management therapy now has been implemented as part of the Norwegian government’s action plan (the Plan against violence in close relationships), this kind of therapy is no longer a core activity for Reform. Still, we act as agents for the approach, both in the Norwegian society, where the need is still significantly higher than the service provided, and abroad. This winter we have been training 20 Czech therapists in Prague in Reform’s anger management methods, actually financed by the same program as this conference is part of.

For over a year now, Reform has been piloting an educational program for youngsters aged 14 to 15 to make them aware of the importance of healthy and sound relations between boys and girls, and in particular to stop dating violence and sexual harassment among teenagers. The program is financed by the Norwegian department of Justice, and finds place in collaboration with The Norwegian Protestant Church, which has let us in in the church’s confirmation training. This has shown to be a most useful arena, and the pilot is a great success. The program thus is to be expanded to new groups this year, and maybe also in the form of a Nordic expert conference in April 2016. Reform also is partner in a dating violence project in Bulgaria through the Norway Grants funds, starting this autumn with training of peers in Sofia.

Reform has not initiated a special campaign against violence against men. I do not exclude that this might happen. Currently we let our commitment for men and boys as victims get other expressions – especially in being a consistent defender of the term «violence in close relationships», which is gender-neutral and thus has the potential to include all violence. I must admit that this has not always been easy. Some sections of the women’s movement tends to «reserve» violence as an issue in which women are victims exclusively. However, we see that the term is now well established in many feminist groups. Most of them are true defenders of a non-violent society, whatever gender affected.

All violence is harmful and should be fought. Men are totally more exposed to violence than women because of the violence committed among men both in intimate relationships, nightlife and other social arenas.

It is also an indisputable fact that women exert a significant proportion of violence in close relationships, both to children and to men. The documentation for this is becoming more and more evident in Norway, and should of course not be left unspoken of.

Considered the fact that men carries out the gravest violence in intimate relationships, it is still extremely important for men to mark their clear commitment to fight VAW.

Since women indisputably suffer more under relationship violence than men, it is quite impossible to moralize over what may be seen as women’s lack of commitment on behalf of battered men (and children!). Moreover, to be honest – there have not actually been taken a lot of initiatives by men to stop men’s violence against women.

It is not men’s role to address women’s possible shared responsibility – it is our task to show that we are serious about it, when we want to fight domestic violence, all violence in close relationships and especially; men’s violence against women.

Let me add that it probably in this matter is wise to gather, rather than divide: Both women, children and men – as well as elderly, disabled, ethnic and religious minorities and every other group subject to discrimination – do all profit on a higher level of commitment to fight violence in society in general, and violence in close relationships in particular.

Boys and girls in no man's land